“Case management is for people who can’t quite get it all together themselves,” Maxwell said. “Our major services are cleaning houses, giving baths, doing grocery shopping, helping coordinate meals with Mid America Nutrition (Center), legal services…”

Maxwell said those services were handled locally by Glenn Jacobs.

Maxwell said the center, formerly known as the East Central Kansas area Agency on Aging, has recently expanded it services to additional groups.

“A new group we took on this year is the intellectual and developmentally disabled,” Maxwell said.

She said the organization manages cases in conjunction with COF Training Services, Inc., which handles day services for individuals.

“We do a lot of what we call custom care items,” Maxwell said. “One shot things you might need to stay in your home.”

Those items ranged from the installation of wheelchair ramps to exterminations, help moving from unfit rental properties and dental work.

“This year we’ve done a lot of teeth extractions and dentures,” Maxwell said.

“We provide help, up to $150, one time,” Maxwell said. “Anything a person needs to have a better quality of life, to stay in their own home.”

Maxwell said the level of help is based on state and county funding, as well as donations.

“We’re on maintenance funding through this year,” she said. “It’s kind of play it by ear. I think legislators understand the value of services. It’s just who they decide to cut.”

“It’s frustrating for everybody,” said Ken Kuykendall, commissioner. “The county has to pick up a lot of stuff the state used to do, and we have to raise taxes to do it.”

“They can’t pull any more than they already have out of KDOT, they can’t take any more from the kids,” Maxwell said. “We figure we’re next on the list.”

Maxwell said the 11 regional agencies have submitted reports to legislative representatives, similar to the one presented to commissioners.

“We all put together some sort of report like this,” Maxwell said. “To remind them of what we’re doing, that there are real people out there, and it’s still cheaper to keep them in their home than put them in a nursing facility.” 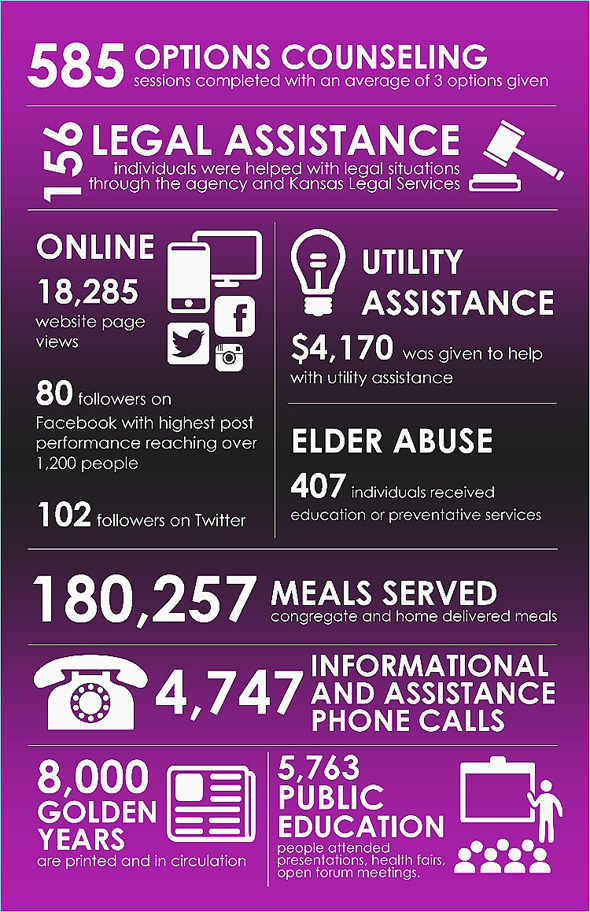 “Our roads were better than the state roads,” said Gaylord Anderson, commissioner.

Tyson said crews were out from 2 a.m. until 9 p.m. Jan. 21. He said the stock of salt and sand was ample, despite the long day.

“I’ve got six loads on order from Knights, and six loads we’re going to pick up on our own,” Tyson said. “When we get all of them, we’ll be back up in good shape.”

Tyson reported issues with some of the county trucks, one of which broke its drive line while treating roads.

“It wrapped around the air lines, and tore all the air lines off from the back end,” Tyson said. “We had to have it towed back in.”

Tyson also reported an issue with the department’s newest truck.

“We changed out an alternator, now it’s charging too much,” Tyson said.

Tyson said the truck is preferred for salt and sand dispersion, because it’s spreader is tied to the trucks speed.

“When it runs and works, it’s great,” Tyson said.

In other business, commissioners:

• discussed the ongoing repair of the courthouse elevator.

“We were real shocked they got started as early as they did,” said Anderson. “They originally told us it would be up to three months. They’ve already started and are quite a ways along.”

“There was about seven or eight pieces,” Thompson said. “Then they pumped out all the water and oil.”

• hosted the monthly department head meeting, which included an update on department inventories; the introduction of Kevin Culley, noxious weed director for the road and bridge department; and discussions on CPR recertification.

Linton elected to KCBS board Osage City resident Corey Linton was elected to a board position on the Kansas City...
Read more

Vaccine, where are you

Happy New Year from our family to yours. May...
Read more

The Osage County Herald-Chronicle was founded in 1863 and serves the communities of Burlingame, Carbondale, Lyndon, Melvern, Olivet, Osage City, Overbook, Quenemo, and Scranton. It is the official newspaper of USD 420, USD 421, USD 434, USD 454, and USD 456.